According to the colour the positioning is as follows:

Central to the above is a Yellow. Extending from the Yellow, there are 8 straight yellow Boundary lines.

Functions - Use the “Fixed Position through Colour / Direction” pictures overlaid on the map, and then faded into translucence. This is for academic only. Not suitable for the use on human clothing, food, accommodation and transport. The Ten Heavenly Stems being the latitude and the Twelve Earthly Branches the longitude. On the above basis, one can schedule the concept of territory of various countries in the world. To locate the various countries and their regional color, but also extends to the provincial, city, county, district, town and villages. 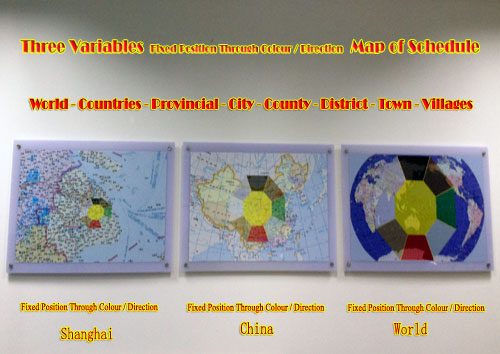